Struck and killed by van 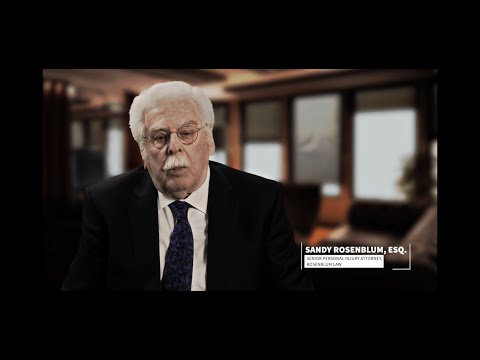 Competing arguments on whether the victim had experienced “impending doom”; a big-shot attorney who was “too large” for the case.

Beverly Mitchell had been a partner at the oldest and one of the largest law firms in Albany: McNamee Lochner Titus & Williams. She was a brilliant woman with a very interesting background. She had graduated first in her college class and worked her way up to a senior post at General Electric. After many years in that role, she decided to go to law school. Once again she graduated first in her class and was hired by McNamee. Sometime thereafter she was made a partner. Her specialty was complex bank transactions in which she represented the banks.

Her office was at 75 State Street, which is the largest street in Albany. You can easily park eight cars abreast on it. State Street in that area rises up to a hill, and the office is below the crest of that hill.

This accident happened during the day. She had gone out to lunch and was coming back. There was a zone that was probably about five or six feet wide of yellow stripes in between the eastbound and westbound lanes. This is an area where cars could neither park nor drive. As she waited for cars to pass, the van came out of a side street to go east and ran into her. It tossed her up in the air, she landed on her head and was instantly killed.

Lawyers on both sides were retained. My firm was asked to represent her estate, represented by her husband, Robert, against the delivery company, Corporate Express.

The judge was Hon. Katherine Doyle. She had been the surrogate of Albany County and had won a seat on the Albany Supreme Court. My partner, George Sarachan, was trying the case and I was second chair, helping him strategize our way through the trial.

The defense lawyer had been “imported” from New York City. The delivery company had been represented by a local defense law firm, but we discovered during pretrial proceedings that they decided to change counsel and bring in a so-called heavyweight. The delivery company was obviously concerned about the possible size of the award. They were also concerned that she had suffered a momentary fear of impending doom.

One of their primary defenses was that she endured no conscious pain or suffering. To make this case they brought in the strongest authority they could find: Michael Baden, former chief medical examiner for New York City. He is known for testifying in many famous cases all over the country for many years. Baden, who had earlier been involved in a famous serial killer case which I defended, is an ordinary-looking individual. You might pass him on the street without taking a second look.

He spoke in an authoritative voice, but I knew better. In reality, his testimony was a composite of surmise and speculation based on the anatomy of Beverly’s skull fractures. His testimony, however, could never address what she saw, and what she felt, and what went through her mind before she was struck–momentary terror.

We argued she had seen the van coming and would have had, however slight, a terror-struck moment. Under New York State law, a jury can make a significant award for pain and suffering for even a momentary experience of impending doom. It was very easy to argue that the victim had time to realize that she was about to be hit. We gleaned this from the testimony of the driver. It was further reinforced by a witness, a CPA from an office was across the street who was looking out of his office window. This was the same man who reported to the Albany Police that he had seen the entire accident.

We also had a strong case to argue for economic damages since she had been earning substantial compensation and could have made significantly more. To prove the latter point, we brought in a legal headhunter from NYC who testified that whatever she had been making in Albany, if she had moved to NYC, she would have made three or four times as much.

We coupled that with testimony from another female attorney who had been her associate. She and Beverly had often talked about leaving the firm and moving to NYC to get a bigger and better job.

The judge allowed both testimonies, which surely gave the insurance company concerns.

In addition to an eye witness, the driver’s testimony was also helpful to us. The driver, Carole Ann Stuart admitted that as she was turning to the left, she was looking uphill to the right to watch for oncoming downhill traffic. Beverly was to her left in the safety zone, so Carole wasn’t looking in her direction as she was turning.

This would have triggered New York’s comparative negligence law. This law states that both parties in an accident can share some of the blame. When the victim of the accident shares some of the blame, the award is diluted by that amount. So if Beverly was deemed to be 25% at fault, whatever the jury awarded would be cut by 25%.

The defense’s big-shot lawyer, it turned out, was a bit too “large” for the courtroom. He was too flamboyant in his language and demeanor. He was dressed in a stylish manner, not at all as conservative as judges and juries up here are used to. In addition, he tried to be dramatic in his tone as he questioned witnesses, and his body language was intended to show his disdain for particular testimony. He was a master of the “arched eyebrow”. Only one defense lawyer in Albany was his equal in that “art”, and his parents had been in burlesque.

To his credit, he had a really nice tie. In fact, I admired that tie so much, he gave it to me!

At the beginning of the trial, the judge’s rulings were virtually all in our favor. When we objected to the defense’s evidence or questions, she would sustain them more often than not. The reverse was true for the defense.

We were told at the outset AIG would never pay more than $1 million.

When the case neared the end, the judge started to get a bit less helpful in her rulings. I had been resisting her suggestions that we settle, and now I believed she was taking it out on us. It may have been her way of saying, “You’ve been offered a large enough settlement, so you had better take it.”

Suddenly we were having a tough time putting in our proof. Objections from the defense were now being upheld.

It’s common practice to talk to the jurors after a trial, and I did that here too. Out of curiosity, I asked them what they would have awarded in this case. Keep in mind, they had not heard all the proof, closing arguments, or the judge’s instructions. The jurors had not deliberated or discussed award amounts among themselves.

Responses from the six jurors ranged from $1 million to $7.5 million. If you averaged it out, it would have come to about $4 million, which means our number was pretty close to what we likely would have gotten had the case been given to the jury for its decision.

While the monetary award brought some measure of justice, it far from made up for the loss of life. As testimony from friends and family revealed, Beverly was known for her kindness, intelligence, and the warmth she brought with her wherever she went. It was an honor to be chosen to represent her family’s interests in this tragic case.