The Rough Road to Justice

Brain damage and paralysis due to traumatic impact 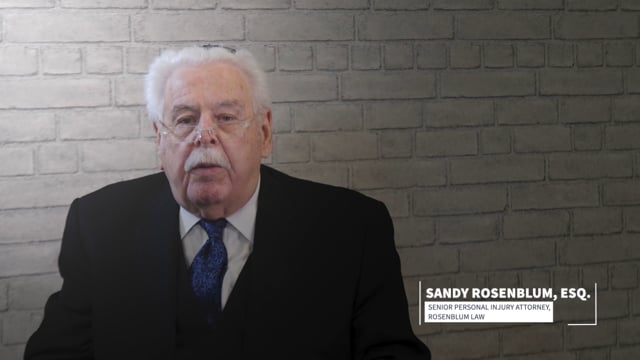 In numerous cases I have undertaken, the cases were either rejected by other lawyers or were worked on and then dropped by them, or the original lawyer had asked the court to be excused from continuing with the case.

That happened in a case involving a defective highway in New York that resulted in a car leaving the road, crashing, and causing my passenger-client to become brain damaged. Another lawyer had worked on that case for four years. The first lawyer thought he had hit a dead end. I was later told he had consulted with an Albany County Supreme Court Judge who advised him to bring the case to me. I worked on it for another eight years.

Route 32 in New York State outside of Saugerties, New York is mostly a two-lane highway. After a tremendous amount of pre-trial discovery researching State documents and submitting the highway to our own engineers to evaluate, we discovered two things. One was that when the road was rebuilt, the crown of the road was not designed and built to established standards for a safe highway. The slope of the pavement from crown to edge was greater than it should have been for safe driving.

The second and more significant defect was the failure of the State to maintain the quality of the shoulder so that cars could safely go on to the shoulder. The shoulder was paved but was in very bad condition.

Early one Sunday morning, three teenagers were returning from working a Saturday night shift at a factory. Someone passed their car at high speed and came very close. The driver of our car swerved to avoid what he thought was an impending sideswipe collision.

Their car was a tiny Ford Fiesta with small tires. This tiny car left the road to its right, and bounced around in the potholes on the shoulder. Trying to get back on the road, our driver overcorrected, turning at too sharp an angle. The car crossed the highway and hit a tree. My client was in the back seat and was thrust upward against a steel brace that supports the roof, and as a result, suffered severe brain damage.

The case had to be filed in the New York State Court of Claims. That means there was only a State judge, but no jury. He would hear the witnesses and other evidence and decide whether or not you have a case, and if so, what the award is going to be.

After years of pre-trial proceedings, the case was finally set down for trial. The State offered $12 million to settle it.

However because we had expert witnesses who had assessed the damages for us including past and future medical costs and personal care, we believed the case value was substantially greater. To the State’s dismay, we rejected the $12 million offer and began the trial.

The trial was bifurcated, which means the judge challenged us to prove the State was at fault. Only then would he allow us to have a second trial to prove the injuries and damages.

After several weeks of testimony from a battery of engineers, our expert witnesses, and entering many documents into evidence showing the State’s poor design and maintenance, we rested our case. Clearly our experts and the documents we produced were very important to prove the State was at fault. But what really made a difference with the court were two singular things.

That was 3 o’clock in the afternoon. The State was going to start the next day. I drove to Saugerties (near Kingston in Ulster County). I had just been told that the State’s first witness against our case was the investigating officer and that he was still working for the town.

There were two doors to enter the police station. Something made me choose the police entrance, not the civil entrance, which was brazen of me. As I was going in, there was an officer coming out.

I said to him, “I need to speak to Officer Heidkamp.”

I said, “Oh, no. We’re going to talk now.” And I practically pushed him back into the police station.

Finally, I got him to agree to meet me when he got off duty at 11 p.m. We met at a Howard Johnson’s that night only 1 mile from the scene of the accident. The officer looked at my photographs, which had been examined by one of our experts, the retired head of photography for the FBI. The display of photos he had prepared compared the State’s photos with our photographs. The photos contradicted each other.

Our photos, taken four months after the accident showed the shoulder badly maintained, full of potholes. The State’s pictures taken from a truck showed otherwise. Our expert from the F.B.I. had opined during our presentation at trial that the State’s photos were misleading because of the angle from which they were taken. It was up to the judge to decide which photos upon which to rely in deciding the case. The State has a truck that goes up and down all the State highways several times a year with a camera mounted on the dash that takes wide-angle photos of the highway itself, and shoulders on both sides of the roads. The State was relying on those photos. We believed the judge would credit our photos as being more accurate in revealing the true condition of the shoulder on the morning of the accident.

Heidkamp looked at all the photographs–both ours and the State’s. We then drove up the highway together to look at the accident scene. I asked him to show me where the accident had occurred. He showed me.

Remember, this viewing was many years after the accident.

“I was going to testify tomorrow that the shoulder was in good condition. But I’m convinced now that my memory did not serve me correctly. The shoulder was very broken up. I can visualize the tracks of the car coming off the road onto the shoulder in the morning dew on the road.”

His testimony was likely the single most important factor in the favorable outcome.

One of the witnesses we called was my client’s father, who had done three tours of duty with the Marines in Vietnam. While preparing him to come to Court to testify about his daughter’s plight, how much she was suffering, wheelchair-bound and brain-damaged, I told him, “wear your Vietnam campaign ribbon in your lapel.”

He testified and it was, to put it bluntly, gut-wrenching. After he left the courtroom, the judge
called me up to the bench and whispered to me, “Tell the girl’s father, ‘Semper Fidelis.’” This is the motto of the Marines and it means, “Always faithful.” Marines take care of Marines, always.

The judge found the State liable. The father was just one of many witnesses, including physicians, life care planners, and economists, who testified about the injuries and the cost of my client’s care for the rest of her life.

The last testimony to be submitted was a video of my client, sitting in a wheelchair. In the video, she was being examined by a doctor, who narrated her severe limitations as he performed his examination. At the end, he asked her what she hoped to be able to do. She was able to only raise one arm upward, with her elbow resting on the arm of the wheelchair, and very, very slowly said, “walk…with the help of God.”

With that, we rested our case.

Several months later, the judge issued a lengthy decision. He, in a sense, apologized for how much he was awarding: $19.5 million.

The entire case was later reported extensively on the front page of the New York Law Journal, the New York lawyers’ bible, as it were.

As expected, because of the record-setting size of the award, the State appealed the verdict. Then, another extremely unusual thing happened.

Very often, Appellate Courts reduce awards. In this case, however, the Appellate Court gave us an additional $1.5 million. The State tried to appeal once again and at this point, I called up the assistant attorney general in charge of this case and said, “don’t you think it’s time to quit?”

He agreed. We worked out a settlement that provided some of the money to my client in the form of annuities. This worked out for both parties, as the State would buy them at a discount, saving it some money. Meanwhile, the client would end up with even more money, since the annuities are non-taxable.

Needless to say, this case was fascinating, rewarding, and even made headlines. Most importantly, however, it gave our client a measure of justice. The verdict would provide for all her material needs for the rest of her life.

This story is about a personal injury case handled by renowned New York attorney Sanford “Sandy” Rosenblum. It is part of our ongoing series, Personal Injury Case Files.