Q & A: Shoplifting in NJ

What Is The Fine & Penalty For Shoplifting in NJ?

Can I Get My Shoplifting Charge Dismissed? Yes. Although rare, your shoplifting charges can be dismissed outright.  In order for this to happen, your criminal defense attorney may file a motion to dismiss the case on the grounds that the charge was merely a de minimis offense (i.e. NJSA 2C:2-11). This means that your conduct was too small and trivial to warrant a full trial and did not rise to the level warranting the charge.  Additionally, if store employees and security guards fail to appear at your hearing, you will be able to ask for a dismissal. Most of the time, the judge will adjourn the case. However, if the employees do not show up a second time, there is a good chance that you can get your case dismissed.

What Can I Get My Shoplifting Charge Downgraded to?

I Was Charged With Shoplifting, What Will Happen to Me on My Court Date?

Your very first court appearance is called an arraignment. You will be asked to enter your plea before the judge. Usually, in shoplifting cases, you will be entering your plea before a municipal court judge. (However, if the goods in question were valued at more than $200, you may have to appear in county criminal court.) If you have not been able to negotiate a plea with the prosecutor, you will have to plead not guilty. It is highly recommended that you hire an experienced criminal defense attorney who can help you every step of the way.

What Happens if a Minor is Caught Shoplifting in New Jersey?

What Must the Prosecutor Prove in Order to Convict Me of Shoplifting? 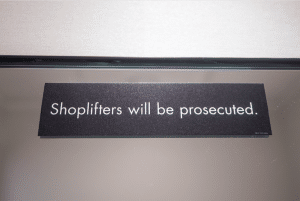 In order for the prosecutor to establish a strong case for shoplifting in NJ, he must successfully prove that you:

Can I be Charged with Shoplifting Even if I Did Not Take Merchandise?

This means that in any of these five scenarios, whether you walk out of the store with merchandise or not, you can be charged with and convicted of shoplifting.

What Happens if I Accidentally Walked Out of the Store With an Item? In this situation, it would not be shoplifting. Since all five recognized modes of shoplifting involve some level of intent to deprive the owner of either the property or the value of the property, simply forgetting that you had an item in your hands cannot truly count. However, if the surrounding circumstances indicated that you had intent, you may end up facing charges (e.g. realizing you had the goods, but not walking back into the store to return them). The upshot of this is when an innocent person accidentally walks out of the store with something he did not even intend to walk out with and is apprehended by security officers. In a case like this, we may feel as though we must prove our innocence more so than relying on the phrase “innocent until proven guilty.” Therefore, to avoid even this situation, make sure that you are ever-cognizant of what you have in your hands when you leave a store.

What Happens if I get caught Shoplifting and They Let Me Go?

There are several possible reasons why a store would let someone go without asking him/her to sign papers or turning the accused over to the police. One is that the manager or owner simply doesn’t want the hassle. Another is that the store already has the accused’s information, in which case it could choose to send a summons in the mail.

Regardless of the reason, a person should never admit to shoplifting, even to friends and family members, as this information could be later used against him/her in a trial or civil case.

What is the Statute of Limitations for Shoplifting?

I received a civil demand letter after shoplifting. Do I have to pay this?

Most likely. Large department stores (Target, WalMart, Kohl’s, etc.) sometimes send letters to accused shoplifters demanding money “or else” charges will be pressed. This letter is legal and the store is entitled to recoup the loss of any shoplifted goods, as well as damages associated with the loss (although those can sometimes be difficult to prove) and a civil penalty. However, a person should never just pay the amount requested without first speaking to an attorney. An attorney may be able to negotiate the amount or determine that a person would be better off fighting the charges in court. The bottom line: Do not respond to this letter without speaking to an attorney.

Can I get my New Jersey Shoplifting Conviction Expunged?

END_OF_DOCUMENT_TOKEN_TO_BE_REPLACED
Google Rating
3.6
Based on 518 reviews

Truck accidents in New York and New Jersey are among some of the worst accidents on the road. When a passenger vehicle is involved in an accident with a large commercial truck, the results are often END_OF_DOCUMENT_TOKEN_TO_BE_REPLACED

Anyone who has been in an accident in New York or New Jersey can expect to get calls from insurance adjusters—one representing each policyholder who was involved. As an insurance adjuster myself for END_OF_DOCUMENT_TOKEN_TO_BE_REPLACED

Originally published here. North Carolina’s Second Chance Act, while promising, will not reduce the state’s recidivism rate—the rate at which people with past convictions reoffend. At present, END_OF_DOCUMENT_TOKEN_TO_BE_REPLACED